To Restore Reputation of a Renault Founder, Family Goes to Court 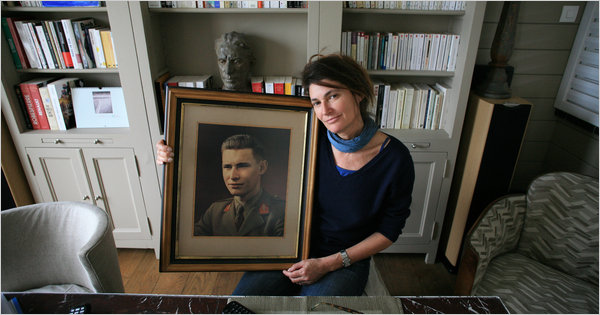 Hélène Renault-Dingli with a portrait of her father, Jean-Louis Renault, and a bust of Louis Renault in the background, is one of seven family members seeking to overturn the nationalization of the car company © Laurent Dingli

By DAVID JOLLY and MATTHEW SALTMARSH

PARIS — Nearly 70 years after the pioneering automaker Louis Renault died in a French prison, accused of collaborating with the Nazis, his grandchildren are seeking to restore his reputation — and gain compensation for what they say was the illegal confiscation of his car company by the state.

Louis Renault helped found the French automaker Renault in 1899. It was nationalized in 1945.

Family members, whose efforts at legal redress had been stymied since the de Gaulle provisional government nationalized Renault on Jan. 16, 1945, have seized on a new law that allows individuals to challenge the constitutionality of government actions in the courts. If they win, they could receive well over 100 million euros, or $143 million, from the state, their lawyer said.

The family insists, however, that cash is not the motivating factor.

“It’s not my priority to monetize this,” said Hélène Renault-Dingli, one of the seven grandchildren seeking to overturn the nationalization. “We’re fighting to win back his place, but no amount of compensation could make up for this violence that has been experienced by our family.”

No one disputes that Renault worked for the Germans; virtually all of France’s big industrial groups did. What has been contested since the liberation of the country is whether what happened to the company soon afterward was legal.

Renault, like the other major French automakers — Citroën, Peugeot and the truck maker Berliet — produced vehicles for the Third Reich. Renault’s tank unit was directly controlled by the Germans, while its auto and aircraft units, as with the other companies, were under French management, supervised by executives from Daimler-Benz.

Yet Citroën and Peugeot were not nationalized after the war; their owners were deemed to have been patriots, and Berliet eventually won back its private status.

Mr. Renault died in prison on Oct. 24, 1944, before he could face trial. He had aphasia, and the official report lists uremia as the cause of death. His family contends that he was murdered, although they have no proof.

The case illustrates the continued sensitivity here about the German occupation, in which Hitler imposed his will on the French nation from 1940 to 1944, turning the country into an appendage of the Nazi war machine. The Germans depended in large measure on the willingness of the French police, industrialists and managers to carry out their bidding.

On a more fundamental basis, millions of people faced regular choices about whether or how far to compromise with the occupiers to survive. That makes black-and-white assessments of many actions difficult.

“It’s extremely difficult to say to what extent Louis Renault should be considered a collaborator,” said Patrick Fridenson, a professor of business history at the École des Hautes Études en Sciences Sociales in Paris and the author of a book on Renault.

Mr. Renault, he said, “ran the risk of complete dispossession if he resisted the Germans.”

Monika Ostler Riess, a German scholar who investigated French and German sources while researching a book on Renault’s history during the occupation, said she had found no evidence that Mr. Renault collaborated any more than his peers.

“He just tried to save what he had, what he had built,” she said. The alternative to cooperating with the occupiers was to see the Germans take over his company, she added.

Mr. Renault, along with two brothers, founded the auto company in 1899. After traveling to the United States and seeing the revolutionary production techniques of Henry Ford, he introduced American management methods in France. During World War I, he led the development of battle tanks, including the Renault FT17, the first tank to employ a rotating turret, and was lauded as a patriot afterward.

By the time World War II began in Europe in 1939, Renault was a highly diversified conglomerate, the biggest industrial group in France, employing about 40,000 people. Mr. Renault held 96 percent of the capital, with family members and top managers holding the rest.

While no one has produced evidence that he was sympathetic to the Third Reich’s ideological goals, there is no evidence that he ever aided the resistance or de Gaulle’s forces, either. (Mr. Fridenson said more research was needed into related archives, especially in Germany.)

Mr. Renault also created ill will on the left in France, firing 2,000 union members in a 1938 labor dispute.

Such actions left him without political allies in the first hectic days of the liberation, as the United States and British armies began driving the Germans out of France and the Gaullists and Communists were taking control.

Several photos of Mr. Renault with Hitler, including one at the Berlin Auto Show before the war broke out, also helped to cement his image in France as a Nazi tool.

Of all the companies nationalized from 1944 to 1948, only Renault was not indemnified, although the minority shareholders were eventually compensated.

Mr. Fridenson said the nationalization policy of de Gaulle’s government was partly a means of speeding the modernization of the French economy after the war.

As a result, “the Renault nationalization wasn’t a pure sanction,” he said. “About half of the argument made by the government at the time hinges on modernization. One rationale was that Renault wasn’t making ‘people’s cars’ like Germany and the United States.”

Twice before, the family has sought to overturn the ruling and obtain compensation. In 1954, Mr. Renault’s son and wife were told by a judge that he could not examine the validity of the ruling by the de Gaulle government. The State Council, the country’s highest administrative court, reached the same conclusion in a 1961 appeal.

The descendants’ current legal case against the state was made possible by a groundbreaking law enacted in March 2010 that allows citizens to challenge the conformity of legislation with the French Constitution.

Supported by President Nicolas Sarkozy as a means of modernizing the French legal system, the law has had several unintended consequences, not least of which has been a flood of cases in the appeals courts. It has already been employed in hundreds of cases, including the trial of Jacques Chirac, the former French president, who is charged with creating fictitious jobs as mayor of Paris.

Thierry Lévy, a lawyer representing the Renault family, filed the case with a high-level civil court in Paris last week. He estimated the family could receive compensation of more than 100 million euros if the courts find the 1945 nationalization order illegal. The legal question, he said, is not whether Mr. Renault was a collaborator but how his heirs were treated.

“If the government decides to confiscate someone’s property,” Mr. Lévy said, “this person must be judged and declared guilty of something. Otherwise, the confiscation is illegal.”

Renault has a market value of about 11.7 billion euros, and the French state maintains a 15.01 percent stake. The company has not discussed the case with the family, said Caroline de Gezelle, a Renault spokeswoman. She declined to comment further.

The family won a small victory last July when it used the courts to force a historical museum — the Memorial Center of Oradour — to remove from display a photograph of Mr. Renault with Hitler at the Berlin Auto Show in the late 1930s. The photograph had been exhibited alongside a caption that said Renault had built tanks for the German Army.

Regardless of how the larger case turns out, the family’s campaign is already reopening old political wounds.

The French Communist Party issued a statement on May 13 accusing the grandchildren of seeking to “rewrite history” and “extort funds from the state.”

A version of this article appeared in print on May 20, 2011, on page B4 of the New York edition with the headline: To Restore Reputation Of a Renault Founder, Family Goes to Court