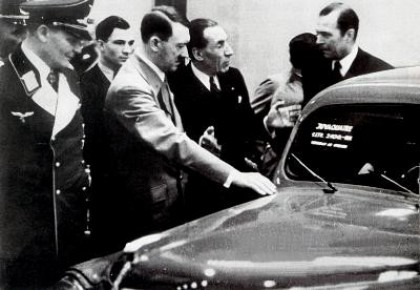 Berlin pitch … Louis Renault (centre) presents a car built by his group to, from left, Luftwaffe chief Herman Goering and the leader of Nazi Germany, Adolf Hitler, in 1937. Photo: AFP

PARIS: It was one of the most shameful and shady chapters of French history: the collaboration of industrialists and business owners with the Nazis during the German occupation.

A historical can of worms was reopened in a Paris court on Wednesday when the grandchildren of the inventor and car maker Louis Renault began a legal battle claiming his famous company was unfairly confiscated by the state as punishment for allegedly collaborating with the occupiers.

Mr Renault, who founded the car maker in 1898 with his brothers, died in prison while awaiting trial for collaboration in 1944, two months after the liberation of France. In January 1945 Charles de Gaulle and the provisional government signed a decree confiscating the company and nationalising it, accusing Mr Renault of working for the Germans and providing their armies with vehicles and services to help the Nazi war effort.

Mr Renault’s seven grandchildren have now seized on a new law introduced by President Nicolas Sarkozy to argue that the confiscation did not abide by the French constitution. Their lawyers argue that no other company was subjected to the same treatment as Renault and that it was unfairly nationalised as punishment without Louis Renault ever going to trial. They are demanding financial compensation from the state.

The case has sparked outrage from the Communist Party, communist trade unions, deportee groups and some historians, who accuse the family of trying to rewrite history. The Communist Party said it vehemently opposed ”any attempt to rehabilitate Louis Renault”.

One of the grandchildren bringing the case, Helene Renault-Dingli, said the battle was about how unfair and unconstitutional the state had been in confiscating the company. ”This is not a re-reading of history,” she told TV channel TF1, and said she welcomed a new debate among historians about what really happened in Mr Renault’s factories during the Second World War.

There is no doubt among historians that Renault provided motors, vehicles and technology for the Nazi occupiers during the war. The question is whether the company did this willingly or whether, as the family suggests, it had no choice.

The celebrated war historian, Henry Rousso, told Le Figaro: ”Renault worked for the German war economy. With what degree of enthusiasm or constraint? That remains largely to be studied.”

Some historians point out that other big French industrial groups, Peugeot and Citroen, who also worked for the Germans, chose to support the resistance and Allies from 1942 to 1943.